With the Autumn/Winter 2013 collection out in the open, I thought it would be a good idea to explain a little about how it came about and where some of the pieces' names came from.

After a rummage at my Mum's on the Isle of Wight last year, I unearthed a load of my old CDs from my teens - albums by Garbage, Elastica, Massive Attack, Tricky and, going back a bit further, Shakespeare's Sister and Tori Amos, to name a few. It got me thinking about the music specifically and that time in my life in general. I was a fairly upbeat and happy teenager but a lot of that music was quite angst-y and moody, which pretty much the vibe at the time.

So I returned to London with an armful of my old CDs and proceeded to listen to all of them, reminiscing in that gleeful, indulgent way that you do when you rediscover gems that you'd forgotten all about. The music inspired a feeling that harked back to the 90's and the grunge period and so the seed for the AW13 collection was sewn. The dark reds, blues and greys all reflect a mood that was inspired by that music.

One of my favourite pieces from this collection is the Justine cardigan, named after Justine Frischmann of Elastica (below - I'm sure I tore this picture out of the NME and had it on my wall). When 'Stutter' first came out I couldn't get enough of it - I remember waiting for it to come on the radio and frantically pressing record on the cassette so I could tape it. It had pride of place on one of my favourite mix tapes which, sadly, has long since disappeared. I thought Justine was super cool and her love triangle with Brett Anderson (who I had a bit of a crush on) and Damon Albarn only made me admire her even more.

The cardigan itself is based on a bestselling shape from a previous season and is so dense it could easily be worn in place of a coat. It's knitted in a British blend of cashmere & lambswool, so is incredibly warm and the shape means it's versatile enough to go with almost anything in your wardrobe. 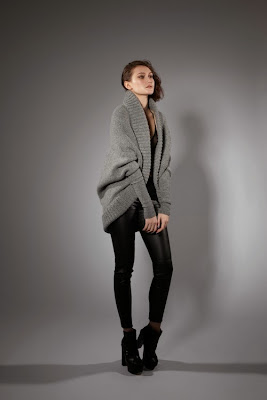 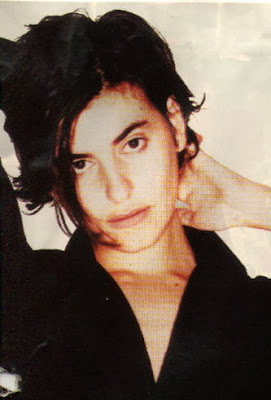